Kinesiology tape: Should I use it for back pain?

The usage of kinesiology tape has taken off over the last 10 years or so. Pro athletes can often be seen on television with bright colored tape across their bodies, supposedly helping them to continue to perform at a high level, even when injured or having aches and pains.

However, the reported benefits of the tape for athletic performance and injury recovery, as well as increased blood flow, are not based on a large body of scientific evidence.

Many people first saw the tape and heard about its alleged benefits around the time of the 2012 London Olympics. The athletes who wore it were likely under the impression that it would improve their pain and performance, however it was given little critical appraisal to assess whether it was, in fact, effective for athletic performance as well as injury prevention and recovery.

Conversely, over the last couple of years, kinesiology tape is not seen as often as when it was at its highest popularity a few years ago. This may be because the initial hype has now gone, but may also be due to the fact that more and more research has challenged its supposed benefits. Another example of a performance aid used in the past was the intra-nasal breathing strip, which was said to help athletes breathe better - however, more or less nobody wears these anymore, as the initial buzz has gone and the science has near but all found that it doesn’t have a meaningful effect.

The fact is, there is not one miracle cure to fix muscle and joint pain or injuries instantaneously. Rather, recovery is often the sum of many different things that work together to bring overall relief and improvement. In the case of athletes, they may notice a benefit from using kinesiology tape but the cause of the improvement is perhaps not as specific as they think. It may also be due to the fact that their overall treatment and training is helping them to improve or that there is a natural regression of the injury as the body heals and pain sensitivity decreases.

While there is no clear evidence to suggest that kinesiology tape alone will relieve back pain, there is no harm in trying it as one part of an overall pain relief regime. Clinical guidelines for the treatment of muscle and joint pain recommend staying active, doing specific exercises for your pain area, getting enough sleep and learning about pain and recovery. Read more on this in our blog post about the fundamentals of recovery. 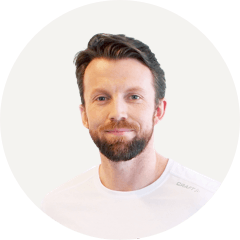 Head Physio
at Reach
Andreas has a masters degree in physiotherapy from the University of Southern Denmark and has been running his own physiotherapy clinic since 2012.

Tired of back pain? Here is why you are not getting better.

What is the Reach app, and why does it work to get rid of your pain?

“I used to run 10km before my back problems. Now I have started running again - 3.5 km three times a week now.”

“Loving the app so far. Starting to really feel the progress after just a few days.”

“I get to do my exercise when it fits me, and the physios adjust the routines along with my progress.”

“The encouragement I have received from Andreas has been really motivating.”

“The physios give amazing support through the chat feature. I would recommend this app 100%.”

“So grateful even though my hairdresser says he cannot believe I have cured it online!”